Guatemala’s rural population faces malnutrition, low levels of education, a changing climate and informal employment. These underpin poverty, emigration and violence. To a large extent, the vulnerability of Guatemala’s rural communities is tied to the nation’s wealth and income inequality, which is among the highest worldwide. An inordinate amount of private land is held by a small minority. As a consequence, land is highly under-capitalized, unproductive and idle. One can easily perceive this when comparing the productivity of landholdings. The large estates are typically abandoned with a few head of cattle spread over hundreds of hectares; small farms are intensively cultivated by poor farmers, often with subsistence crops. The same inequality is manifest in forestland holdings. The local forest industry is rudimentary, lacking access to finance and technology. Owners of large tracts of forestland live in cities and rarely apply a technical approach to management. Even if they can navigate the substantial hurdles to legal harvest, stumpage prices are low. Enforcement of forest protection laws is weak. Without muscular protection or financial incentives to protect and invest in forests, they are relentlessly exploited. The agricultural frontier is in continual expansion. 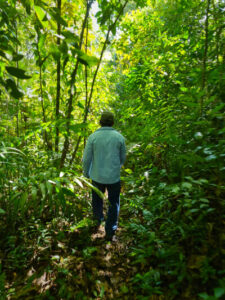 Stocked with valuable hardwoods and adjacent to an international seaport, Izabal has experienced extremely high rates of deforestation. Cattle ranching, farming, mining and urban expansion are all major drivers of deforestation. Agribusiness has established hundreds of thousands of hectares of oil palm and rubber monocultures over the last quarter century. In addition to these long-standing drivers, several more have emerged in recent years. On the one hand, global warming has led to frequent dry spells and thousands of fires that have ravaged Guatemala’s forests. Increasing frequency of fires has afflicted much of Guatemala’s tropical forests. However, not just rising temperatures have underpinned fires. Areas where land tenure includes community management and vibrant forest enterprises, fires are far less prevalent. The satellite imagery shows the stark contrast between land under state protection and those under community forestry concessions.

Finally, drug trafficking has emerged as an additional driver of forest loss. Traffickers deforest to run cattle, which in turn are used to launder money. Runways built on recently deforested pasture are constructed for the movement of narcotics and territorial control. As much as two thirds of deforestation within the Mayan Biosphere is attributed to cattle ranching including prominent cases associated with trafficking. 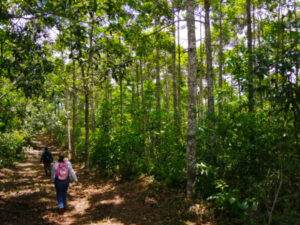 Estimates by Guatemala’s leading academic institutions put Izabal’s annual forest losses at 1.39% from the early 1990s to 2001. The rate accelerated from 2001 to 2006 to 3.01% per annum. Much of this occurred in protected areas. From 2006 to 2010, the rate slowed somewhat to 1.29%. While the departmental (provincial) deforestation rate fell between 2010 and 2016, the municipality of Livingston, which hosts the majority of Izabal’s remaining contiguous natural forest, continued to experience serious forest losses. Hotspots are shown on the map which show continued depredation of the buffer areas around and within its protected areas.

The effect of deforestation is not solely felt by the environment. Dozens of communities depend on forest resources for fresh water, firewood for cooking, timber for building materials, hunting grounds and as a source of wild foods and medicine.